Playing with Streams and Monitoring Docker

In this post we’ll show how to collect system metrics from Docker containers, making use of a very simple application that relies on Akka Streams/HTTP and all the benefits of Kamon’s machinery.

Unless you were living under a rock and that rock is under the Titanic, then you must have heard about Docker. Nowadays Docker is everywhere and all sorts of things can run in a container. You might already be using Docker for CI purposes or even in production and when you do so, well, monitoring needs to be there too! We did a bit of exploration on monitoring the very basic metrics we would like to get out of a container:

How do we get these Metrics?

If you feel like complicating your life with this, you can use the container ID to fetch CPU, Memory and IO metrics from /sys/fs/cgroup/... but then there is one missing thing: Network usage metrics. As it turns out, the Docker network interfaces only exist under a network namespace, which we didn’t want to investigate further as recent versions of Docker provide a much better and cool alternative for this: the Docker Remote API.

The Docker Remote API is very easy to use, you just send a GET request to /container/${container-id}/stats and you will get back a live stream of events with all the desired metrics for such container. A live Stream, by now you should clearly see where this is going :).

You will need to do a little change to your /etc/default/docker file, setting the DOCKER_OPTS variable to the following:

That configuration change will make Docker bind to port 4243 and there is where the Remote API will be available. Save your changes, restart the docker service via service docker restart and then we are good to go. When you hit the Remote API endpoint for a given container you will get one event per second containing the container stats.

Setting up the Project

This test application is being written in Scala, with SBT as the build tool, so we will start by adding the following dependencies:

As we mentioned above, the Docker Remote API gives you a live stream of events with the container stats and, of course, we will use Akka Streams to consume and transform such stream. Our intention here is not to make a formal introduction to Akka Streams but rather to show how it can help us consume these events in combination with Kamon, but, if you feel like reading then we would like to recommend reading Mark Hamrah’s Introduction to Streams.

Let’s skim through some of the code:

We want to record the stats in different Kamon entity recorders for each metric type, that is why we are broadcasting the incoming “fat” ContainerStats message into several flows, so that each one can take whatever it finds interesting. The Broadcast element simply emits elements from its input port to all of its output ports.

The most important part are the last couple lines of the above code. Here we draw a graph that defines how messages flow through the stream. The high level overview would be: get the stream, broadcast it to the network, memory and cpu smaller flows and let them record the stats into Kamon recorders independently.

A Sink is the endpoint for the stream. The data from the stream will eventually find it’s way to a Sink.

The sinks we have here are very simple as they just grab the correspondent stats type and consume it by recording into the desired entity recorder. Take a look at how NetworkMetrics, MemoryMetrics and CpuMetrics are implemented.

For this application we went with a very simple and fixed approach, just set the container names you want in the configuration file and metrics for them will be fetched upon startup.

By default the application is configured to use with StatsD through Kamon. The only thing we need to start visualizing this stats is our Docker-Grafana-Graphite image that comes bundled with StatsD, Graphite and Grafana. After starting up this application and playing a bit with a Grafana dashboard you can start getting something like this: 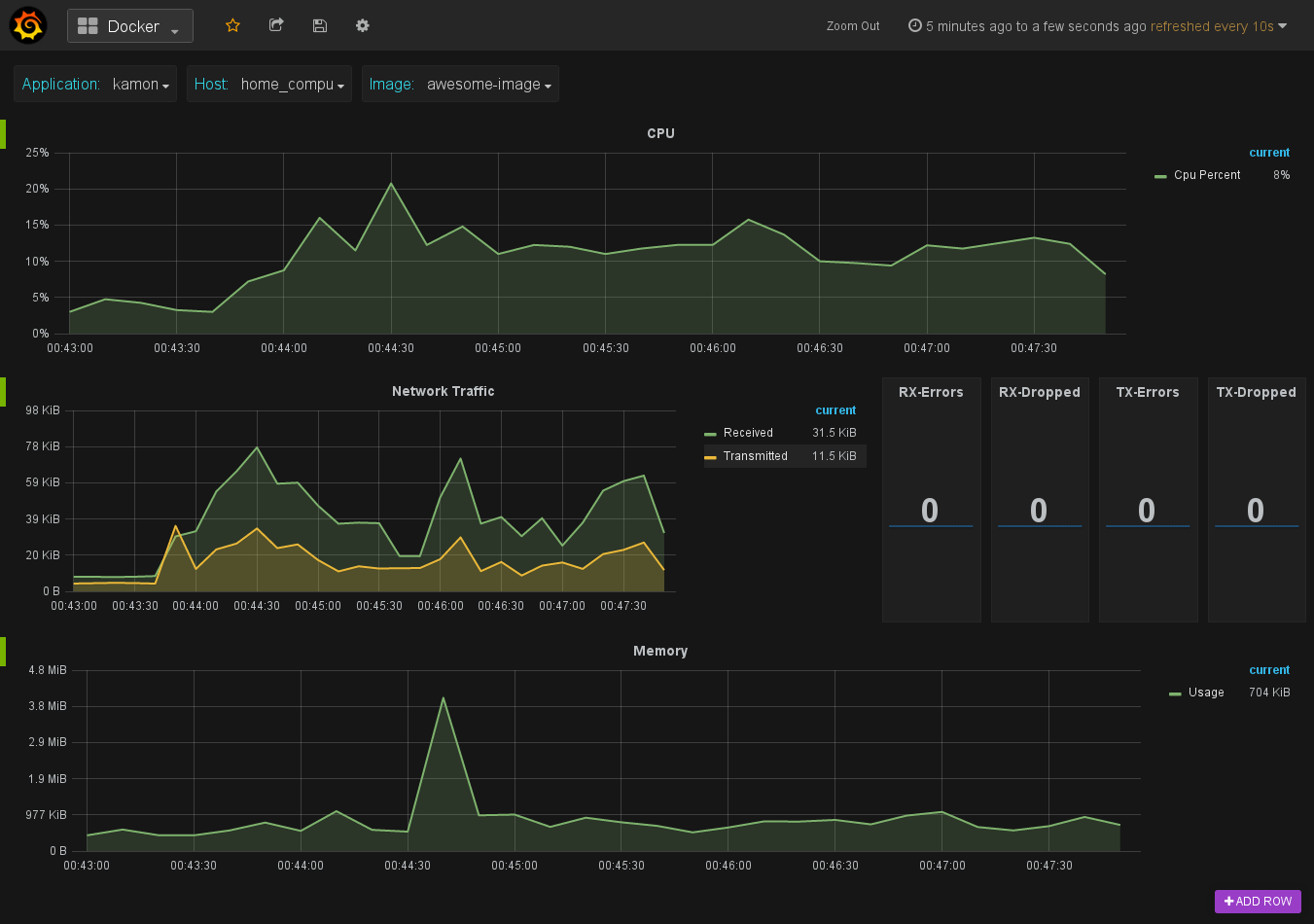 Cool, isn’t it? just a few lines of code, mostly dealing with the streams and bum! Metrics for your Docker containers! Of course, the full code is available at the Github Domino Repo, don’t hesitate to clone, fork and start experimenting yourself!

Here are a few things we would like to add in the future:

And of course, your ideas can help improve this project too. Feel free to leave comments, suggestions and maybe even some pull request. That’s all for today, enjoy!

Kamon Just Got a Lot Easier to Use, Welcome Kamon 2.0!

We are very happy to announce that Kamon 2.0 is out! This new release focuses primarily on simplifying the installati...
Read More

We are pleased to announce the availability of Kamon APM, a hosted APM solution built to work nicely with Kamon and a...
Read More

Dear community, yesterday Diego and Ivan had a call to discuss a bit of what we think the future of Kamon should l...

Today we are announcing Kamon 1.1.0 with a couple bugfixes and a small but important improvement on context propag...

Dear people from the community, we are extremely pleased to announce that after months of efforts, Kamon 1...

Dear community, we just published Kamon 0.6.3 which has a few minor bug fixes.

Dear community, we just published Kamon 0.6.2 which has a few minor bug fixes and even new modules being added!

Dear community, we just published Kamon 0.6.1 which has a few minor bug fixes and a correctly published kamo...

Dear community, we are really happy to announce that after a long long wait, lots of fixes and even new modules be...

Dear users, Kamon 0.5.2 is out! This is a minor update containing just a handful of changes, mostly bug fixes.

Dear users, Kamon 0.5.1 is out! This is a minor update containing just a few changes, probably the most important ...

Dear users, Kamon 0.5.0 is out! Lots of community contributions, support for Play! 2.4, reporting of any metrics t...

20 minutes in the Playground: Monitoring Scalatra with Kamon

In this post we’ll show how to take a simple Scalatra project and set up basic monitoring with Kamon. This is a re...

In case you didn’t notice yet, we are using Akka internally to handle certain aspects of Kamon’s infrastructure, l...

Dear users, we are extremely happy to announce that our long-awaited 0.4.0 release is now available!

We have been working on Kamon for almost two years now and during that time we have seen it evolve from “the thing...

We are very happy to announce that Kamon 0.2.5/0.3.5 has been released! This release comes with many improvements ...

If you have ever used spray-client in a real world application you certainly must have come to the point of settin...

Experimental support for Akka Remoting and Cluster is now available!

Dear users, we are really happy to announce that our efforts on bringing support for Akka remoting and cluster to ...

Dear users, the Kamon 0.3.2/0.2.2 release that went out last week turned out to have two problems:

We are really happy to announce that Kamon 0.3.2/0.2.2 is now available for download! This version comes with many...

Get started quicker with our docker image

We are very excited to see people adopting Kamon as their monitoring tool for reactive applications and, of course...

Kamon for Akka 2.3 is now available!

Dear community, we are happy to announce that Kamon 0.3.0, our latest release, is out and compatible with Akka 2.3...

Dear community, some time ago we started working with Akka and Spray, and it has been awesome! The more we learned...

Start with a 1-on-1 session

Your first step towards Kamon APM is conversation with Kamon's lead developer, Ivan. He'll help you figure out if Kamon APM is the right tool for your team and personally guide you through the initial setup and next steps. Here he is: